In 1787 during the Constitutional Convention, tension rose out of the new addition to the Constitution. After the founders wrote the Constitution, they needed nine states to ratify it before it became law. George Mason, who was the author of Virginia Declaration of Rights, wanted the Constitution to include guarantees for fundamental liberties that reflect on the development of a new nation after the Revolutionary War.  Federalists such as James Madison of Virginia supported the Constitution and wanted states to ratify it. Anti-Federalists did not support the Constitution because they wanted stronger limits on the national government’s power. The debates changed the mind of James Madison.  Madison thought that by adding the amendments, which would later be known as the Bill of Rights, the new amendments would meet the objections of some who would oppose ratification in its previous form.

Congress wrote twelve amendments but the states only passed ten. Originally, the Bill of Rights applied only to limiting the power of the government of the United States and not state governments. The Bill of Rights prohibits the federal government from abridging the freedoms of religion, speech, and press and the right to petition the government for redress of grievances; the right to keep and bear arms; the right of the people not to have troops quartered in their homes; the right to protection against unreasonable government searches and seizures; the right to jury trials in civil and criminal cases and of a grand jury in criminal cases; the right to due process of law in court; a prohibition on government taking private property without just compensation; a prohibition on excessive bail and fines and on cruel and unusual punishments; and two amendments defining rights of people and of the states: "the enumeration in the Constitution, of certain rights, shall not be construed to deny or disparage others retained by the People"; and "the powers not delegated to the United States by the Constitution, nor prohibited by it to the States, are reserved to the States respectively, or to the People."

In Their Shoes: What were the conflicting issues the authors of the Bill of Rights faced?

Analyze: Compare and contrast the Bill of Rights to the Virginia Declaration of Rights. 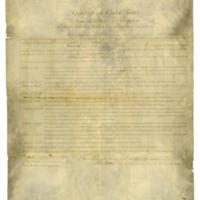 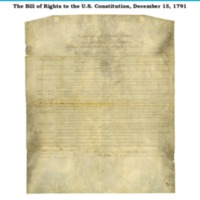 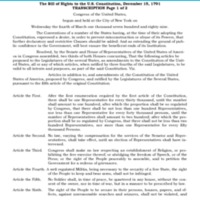