This painting depicts James Madison, a Virginian, who was born on March 5, 1751 in Orange County, Virginia. Madison held many titles in his life including Virginia politician, American statesman, and fourth President of the United States, but is famously remembered as the father of the Constitution. Madison drafted the Virginia Plan that formed the basis for the debate in the Constitutional Convention of 1787. Madison joined with Alexander Hamilton and John Jay to write the newspaper essays known as “The Federalist” that provided the most thorough and persuasive analysis of the Constitution. Later Madison would introduce the first draft of what became the Bill of Rights in the House of Representatives in 1789.

Madison married his wife Dolly Payne Todd in 1794. They did not have any children. Madison died on June 28, 1836 in his home in Montpelier Virginia.

Up for Debate: What are some reasons that someone would argue for or against the ratification of the Constitution?

Analyze: Examine this picture. Based on your previous knowledge, why do you think the artist chose to paint Madison 65 years after his death? What do you think Madison had accomplished at the age his in which he is depicted in this portrait?

Social Media Spin: If this portrait was Madison’s “Selfie,” what #hashtags would he use? 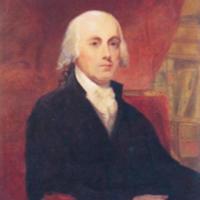 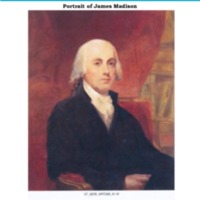