A Petition on Behalf of an Enslaved Person Accused of Treason, 1781

By 1775 more than half a million Black Americans, most of them enslaved, were living in the thirteen colonies. Thousands participated in the American Revolution. They gave their loyalty to the side which offered the best path to freedom from enslavement or the side which had the best prospects for their future lives, although for most the words of the Declaration of Independence, that “all men are created equal,” offered a promise of freedom that they never obtained.

In 1781, Billy, an enslaved man owned by the estate of wealthy planter John Tayloe, escaped from Prince William County. He was captured and indicted for "feloniously and traitorously" joining the British. He pled not guilty at his trial for treason, testifying that he had been forced against his will on to a British warship. He argued that he had never taken up arms on behalf of the king. However, Billy, who was also known as Will and William and whose surname does not appear in any official records, was convicted and sentenced to death. Within a week of the sentencing, two dissenting judges of the county court made their case to Governor Thomas Jefferson that an enslaved person could not commit treason since an enslaved person did not constitute as a citizen. Jefferson postponed the execution. Shortly afterwards, Mann Page, the executor of Tayloe's estate, successfully petitioned the General Assembly to grant Billy a pardon on the grounds that a slave could not commit treason. What happened to Billy after his pardon is unknown.


Read more about Billy in his Dictionary of Virginia Biography entry at Encyclopedia Virginia.

Scan It: Scan the transcript of the document. What information does it provide about the basis for the petition?

Analyze: How does this case show the contradictions in Revolutionary thought, such as the Declaration of Independence stating that "all men are created equal?"

Food for Thought: What does it mean to be a citizen of the United States? What rights and privileges does it convey?

Another Perspective: During the American Revolution, why might an enslaved person want to fight on the side of the British or the Americans or neither? 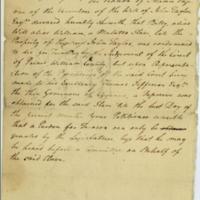 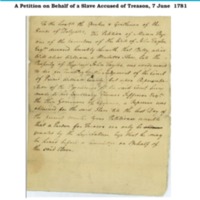 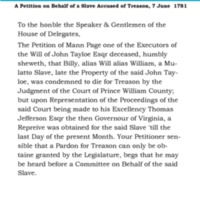 “A Petition on Behalf of an Enslaved Person Accused of Treason, 1781,” Document Bank of Virginia, accessed February 8, 2023, https://edu.lva.virginia.gov/dbva/items/show/187.