John Murray, fourth earl of Dunmore, was the last royal governor of Virginia. Briefly governor of New York in 1770–1771, he assumed a new role as governor of Virginia in 1771. He won the support of Virginians during the conflict known as Lord Dunmore’s War in 1774. White settlers in the Ohio Valley region, which had been claimed by Virginia, were said to have come under attack by a local Shawnee Indian tribe. Lord Dunmore organized a large militia force that he led against Indigenous Americans. Victorious at the Battle of Point Pleasant (located in present-day West Virginia) in October 1774, Dunmore afterwards negotiated a treaty prohibiting the Delaware, Mingo, and Shawnee tribes from settling or hunting south of the Ohio River.

Lord Dunmore’s popularity began to wane in 1775. He was impulsive and alienated key politicians, and the lack of instructions from London hindered his ability to govern. Tensions between the colony and Great Britain increased rapidly. Citing rumors of an impending slave rebellion, Dunmore removed gunpowder from the public magazine in Williamsburg in April, an action that triggered a rapid deterioration in his relations with Virginia’s other political leaders. He sent his family back to Britain, fled Williamsburg early in June, and tried to gather Loyalist supporters in Hampton Roads.

On November 7, 1775, Lord Dunmore proclaimed martial law and offered freedom to enslaved men who escaped from supporters of the resistance and agreed to fight for the king. Dunmore did not free his own enslaved laborers. His offer of freedom to slaves to fight against white Virginians and his recruitment of a regiment of Black soldiers alienated most of the remaining influential planters and political leaders who until then had stayed loyal to the Crown. Thomas Jefferson included "prompting our negroes to rise in arms against us" among the grievances against the king in his draft of the constitution adopted by Virginia in June 1776.

Dunmore’s proclamation sparked a flood of slaves to escape (as many as 2,000 reached the governor) and raised widespread fear of a slave rebellion. Dunmore took the offensive at the Battle of Great Bridge in December 1775, but was so soundly defeated there that he burned nearby Norfolk and fled. In 1787 Lord Dunmore became governor of the Bahamas, during which time he fell from royal favor. He died at his home in England in 1809.


Learn more about Lord Dunmore in the Dictionary of Virginia Biography here.

Think About It: During the American Revolution who do you think enslaved Virginians might have sided with, the British or the American colonists? What advantages/disadvantages could each side offer them?

Analyze: Draw a conclusion about the intent behind the language Thomas Jefferson's grievance in Virginia’s 1776 Constitution and its relationship to Dunmore’s Proclamation.

Form An Opinion: Thomas Jefferson included this grievance in his original draft of the Declaration of Independence, but it was struck out of the final, approved copy. Develop a hypothesis explaining the reasoning of removing this charge from the final Declaration. 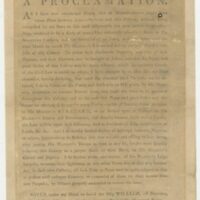