The Equal Suffrage League of Virginia (ESL) was founded in 1909 in Richmond. when eighteen women met at the home of Anne Clay Crenshaw. The league sought to win women the right to vote as a democratic right of tax-paying citizens, which women were. Although independence had been won in 1776, women were still not equal citizens nearly a century and a half later. By denying women the right to vote, they argued, America was stuck in pre-Revolution days of taxation without representation.

The ESL faced organized resistance in the form of the Virginia Association Opposed to Woman Suffrage, founded in 1912. Much of the antisuffragist rhetoric placed women's role within the home and often focused on the idea of separate spheres for women and men. Antisuffragists argued that men's role was in the public sphere whereas women belonged in the private sphere or the home and that if women stepped outside of their designated sphere than the family unit would ultimately suffer.

This broadside highlights the efforts of the Virginia Association Opposed to Woman Suffrage to tie the suffrage movement directly to socialism, a political idealogy that was gaining some momentum at the time due to the increasing power of labor, but was highly controversial for ideas such as opposition to America's participation in World War I.

Social Media Spin: Using hashtags and memes, convert the messages of this broadside into short, social media-style messages that may have been used had the technology existed at the time.

Analyze: Compare this broadside to two other items in Document Bank or other primary source material that sought to limit the rights of a particular group. How are the messages similar? What themes or styles are consistent across the topics and time periods? 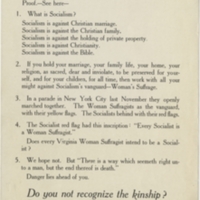 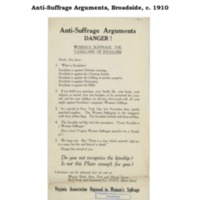