The Equal Suffrage League of Virginia (ESL) was founded in 1909 in Richmond. The ESL became one of the most influential suffrage organizations in the country. Among the twenty founding women, Lila Meade Valentine, a Richmond native, was elected the league's first president. The league's members included several prestigious women, Ellen Glasgow, Mary Johnston, Adéle Clark, Nora Houston, and Dr. Katherine Waller Barrett. During the league's first year, almost 120 members joined, most of them residents of Richmond. Recruiting new members initially proved difficult. Among the obstacles league members met with were the objections of fathers to their daughters participating in the league and women with a lack of knowledge on the subject of or interest in woman suffrage.

From the beginning the ESL faced enormous challenges that well-established organizations, such as the National American Woman Suffrage Association, had already met. Virginia women needed to start an education campaign that would bring public awareness to the issue of woman suffrage. In an effort to spread the word for woman suffrage, member writer Mary Johnston spoke at women's colleges and Valentine gave more than 100 speeches across Virginia encouraging suffrage support. Other members did their part by visiting schools, fairs, and union meetings and distributing materials on city streets. These strategies worked. By 1911, membership had grown to 290, and by 1919 to 30,000 and with numerous branches across Virginia.

Learn More about the ESL and Suffrage in 'Shaping the Constitution'.

Analyze: Select one of the supporting groups listed on this broadside and research their commitment to and involvement in the suffrage movement. Would you have listed them on the broadside? Why or why not?

Current Connections: What political reform movement of current-day America do you relate most closely to women's suffrage? 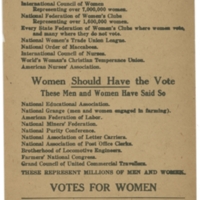 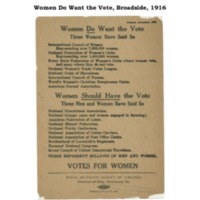