For a significant portion of American history, women were not allowed to vote. Although they were considered citizens with rights equal to men, voting was considered a privilege and not a right and thus not extended to women. In the 1910s, women became extremely vocal about their lack of ability to vote, but not all women supported the fight for suffrage.

The broadside enumerates the concerns of women who opposed legislation allowing women to vote. They believed that in giving women the right to voter that the home and traditional roles of women would change in a negative way which might prove detrimental to society. Women were granted the right to vote when the 19th Amendment to the US Constitution was passed by congress in 1919 and ratified on August 18, 1920. In an interesting twist, Virginia delayed its ratification until 1952. However, women had been voting and taking positions in elected office for over 30 years.

Scan It: Scan the broadside and list any words or phrases that stand out to you. Why did they stand out? What impact might those words have on a person taking a quick or passing glance at the broadside?

Analyze: What arguments are made in favor of women not having the vote? In your opinion, which, if any, of these are justified by historical fact?  Be specific.

Social Media Spin: Imagine you are a member of an anti-suffrage organization, then create a catchy hashtag, motto, or tweet to spread the message.

Current Connections: What arguments were made during past presidential and/ or state elections regarding why a woman should not be elected to the office? 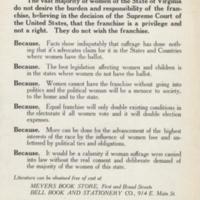 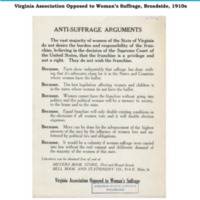