Lynchburg native Desmond T. Doss (1919-2006) was the first conscientious objector to receive the Congressional Medal of Honor. A conscientious objector is one who is opposed to serving in the armed forces and/or bearing arms on the grounds of moral or religious principles. By law, only U.S. service members who distinguish themselves “through conspicuous gallantry and intrepidity at the risk of life above and beyond the call of duty” can receive the medal.

Corporal Doss, a Seventh Day Adventist, objected to killing and refused to carry a weapon.  He served as an Army medical corpsman, 1st Battalion, 307th Infantry Medical Detachment, 77th Infantry Division.  Doss is credited with saving the lives of at least 75 wounded soldiers. Part of his citation states, "Through his outstanding bravery and unflinching determination in the face of desperately dangerous conditions Pfc. Doss saved the lives of many soldiers. His name became a symbol throughout the 77th Infantry Division for outstanding gallantry far above and beyond the call of duty."

Read more in Out of the Box.

Current Connections: Today and throughout the last decade, there have been military actions taken around the world. Although being a conscientious objector is still permitted in all branches of military service, the public may not be aware of this option or how often it is used. Why might this be the case? Explain. 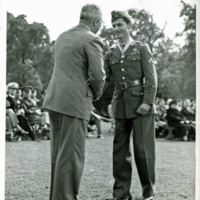 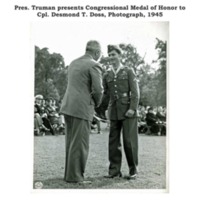