On June 6, 1944, soldiers of the Allied Expeditionary Force stormed the beaches of Normandy as part of Operation Overlord, often referred to as D-Day. Approximately 156,000 American, British and Canadian forces landed on five beaches along a 50-mile stretch of the heavily fortified coast of France’s Normandy region. The amphibious invasions began at 6:30 a.m. The British and Canadians captured beaches codenamed Gold, Juno and Sword, as the Americans captured Utah Beach. U.S. forces faced heavy resistance at Omaha Beach, where there were over 2,000 American casualties. According to some estimates, over 4,000 Allied troops lost their lives in the invasion.

Thirty soldiers from Bedford, Virginia, members of Company A of the 116th Infantry assaulted Omaha Beach. “By day’s end,” according to the National D-Day Memorial, “nineteen of the company’s Bedford soldiers were dead. Two more Bedford soldiers died later in the Normandy campaign, as did yet another two assigned to other 116th Infantry companies. Bedford’s population in 1944 was about 3,200. Proportionally this community suffered the nation’s severest D-Day losses.” The Personal War Service Record of Virginia’s War Dead, part of the records of the Virginia World War II History Commission, documents the sacrifice of 15 of the 19 Bedford soldiers.

Read more in Out of the Box

In Their Shoes: Write an editorial as if you were in charge of a local Bedford newspaper on the one-year anniversary D-Day. How would you commemorate the sacrifice of your fellow citizens?

Analyze: View the records of Bedford residents, including John Wilkes on Out of the Box. What similarities do you see in their pre-war occupations, ages, etc.? 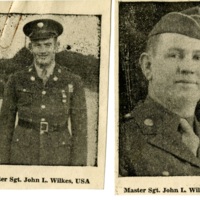 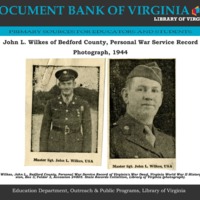