Based in New York, N.Y., 1942-1946. Artists for Victory, Inc. was a non-profit organization of more than ten thousand artists formed to assist in the war effort by using their artistic abilities. Their activities included a British-American goodwill exhibition, sponsoring portrait drawings, demonstrations of arts and crafts, and instruction in military hospitals.

In the fall of 1942, Artists for Victory, Council for Democracy, and the Museum of Modern Art sponsored the National War Poster Competition.  Artists from 43 states submitted 2,224 designs. The posters portrayed 8 themes selected from the President's first war message to Congress on January 6, 1942, as well as 20 slogans.  Artists for Victory selected 50 of the most stimulating and had them reproduced as “war poster labels to carry their vital messages to every person throughout” the country. Many of the posters juxtaposed the strength and goodness of the Allies' cause with the tyranny, destruction, and evil of the nations that fought against them (Japan, Italy, and Germany were known as the Axis powers).

Analyze: Viewing this image, as well as others, identify similarities in color and imagery. How do these artistic choices affect the impact of the image as a whole? Would you classify these as propaganda compared to other image campaigns of the time period? Why or why not?

Artistic Exploration: Select one of the themes from the poster collection and create your own entry as if you were part of the 1942 competition.

Up for Debate: Do you think propaganda messaging is something that a government should sponsor? Why or why not? Find other examples of WW II-era imagery to support your position. 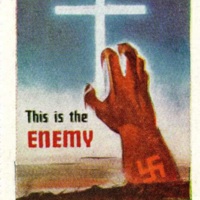 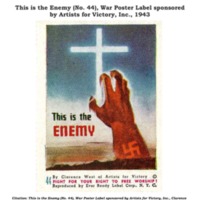