This photograph, taken on January 8, 1944, in Warehouse 29 in Newport News, documents women working on hydraulic bridge parts for shipment overseas during World War II. During the war, thousands of Virginia women held industrial and other war-related jobs that would have been closed to them before the war, either because of the job shortage of the Great Depression of the 1930s or because men would have been hired instead. After the war, returning servicemen often replaced women in industrial plants. As was typical for the time the photographer, who created the title of the photograph, identified the women as "girls."

In Her Shoes: Write a journal entry as if you were one of the women who found herself out of a job when men returned home from the battlefield.

Up for Debate: Do you think the term "girls" was appropriate for this photographer to use? Why or why not? What might the public reaction be today to such a title? 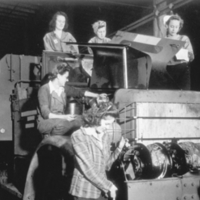 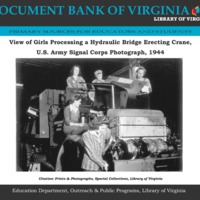