On April 14, 1945, U.S. President Frankin Delano Roosevelt (FDR) was buried in Hyde Park, New York following funeral services at the White House.  Roosevelt had been elected four times to the office of President, a feat never matched, and now prohibited by the 22nd Amendment.

FDR was famous for a number of major decisions and policies, as well as his popularity.  His "Fireside Chats" were broadcast on the radio, changing the way the office of President addressed U.S. citizens. His New Deal implemented programs and policies which sought to alleviate and eradicate the hardships cause by the Great Depression, and included the creation of Social Security, the Civilian Conservation Corps, and the Works Progress Administration.

As a wartime President, FDR led the United States in its fight against Hitler in Europe and Japan in the Pacific, and is remembered in particular for his address after the bombing of Pearl Harbor.

In this proclamation, J.L. Bland, the Mayor of West Point, Virginia, calls for all businesses to close at 4:00 pm in recognition of the funeral services which were scheduled for that time.

Up for Debate: Do you think that businesses should have closed to honor the time of the President's funeral? Why or why not?

Political Plans: If you were a local official opposed to the mayor's proclamation, how would you counter his position? 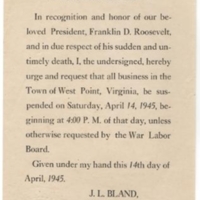 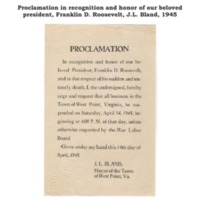