During World War II the American government asked civilians to participate in the war effort. A common way for the government to communicate with civilians was through posters hung in public places. Inspirational, informative, instructive, imploring—the posters were a major part of the war effort. Virginians would have seen many of the posters.

In addition to activities like buying war bonds and collecting scrap metal, people were asked to conserve food and to plant "Victory Gardens" so they could grow enough to supplement their diets. In order to make the season's harvest last, people canned food at home to preserve fruits and vegetables for use throughout the year.

Citation: Office of War Information. Can All You Can. It's a Real War Job! Washington, D.C. , 1943, Prints & Photographs, Special Collections, Library of Virginia

In Their Shoes: What items would you have wanted to plant in your Victory Garden to can later?

Art Exploration: How would you redesign this poster to encourage the same activity if we needed to conserve this way today?

Analyze: What were the goals of this poster and campaign from a civic and emotional standpoint? 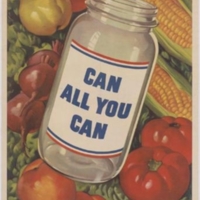 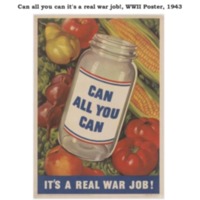