In 1906 Robert Baden-Powell presented this bust of John Smith to the Commonwealth. Although best known as the founder of the Boy Scout movement, Baden-Powell was also an artist of considerable skill.  While in South Africa, he modeled in clay as a relief from administrative duties.  The family of Baden-Powell's mother claimed descent from Captain John Smith, with whom Baden-Powell had much in common.  Both were military men, authors, and key figures in British colonial affairs.

Captain John Smith was an English explorer who helped establish Jamestown, the first English colony in North America. Smith worked as a soldier of fortune before joining the Virginia Company of London in 1606. He sailed to the New World on the Susan Constant, one of three boats containing crew and supplies. During this journey Smith was arrested for mutiny by the ship’s captain, Christopher Newport. Smith was nearly executed for this crime but was saved by the intercession of a chaplain and the captain of one of the sister ships.

After reaching the Chesapeake Bay in 1607, Smith served as one of the governing councilors for the new colony. His prior experience in the military and his knowledge of survival techniques proved invaluable, especially as the other councilors did not possess these skills. The first few months of existence in the colony were extremely hard, and many of Smith’s companions died of famine, illness, or Indian attacks.

In late 1607 Smith was captured by Indians, and according to some of his reports he was rescued from certain death by Powhatan’s daughter, Pocahontas. The accuracy of this account is not certain, as early accounts of his capture did not mention Pocahontas. Smith became the president of the council at Jamestown in fall of 1608.  His tenure was only moderately successful as his policies were unpopular.  While Smith was able to improve conditions at the colony, the colony ultimately failed to produce enough food for the settlers to survive upon, making them dependent on trade with nearby Indians.

Smith was forced to travel back to England in 1609 after a stray match lit his powder bag and set his clothing aflame, resulting in severe burns. After he left, Smith’s enemies set about discrediting him in the colony and with the Virginia Company; however, the period after his departure proved to be some of the most dark in Jamestown's history as over 200 men died, a stark comparison to the small number of deaths during Smith’s leadership.

Analyze: Do you think that the colony would have been successful if Smith had been executed as planned in 1607?

Artistic Exploration: Look closely at the bust of John Smith. From the position of the head and the facial expression, what might you be able to conclude about John Smith the man? Be specific and justify your answer.

In Their Shoes: By yourself or with others, imagine what it was like for the settlers. Do you think that you could have survived in early Jamestown? 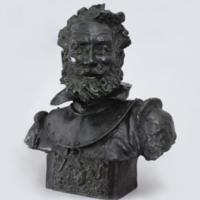 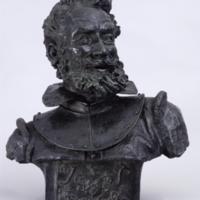 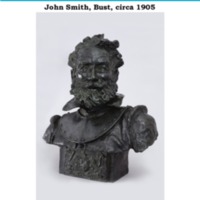