This map is attributed to Captain John Smith (1580–1631) and is one of the earliest representations of Virginia. Smith began a three-month exploration of the Chesapeake Bay and its adjacent waterways in June 1608. He interacted with Indigenous peoples and created sketches of the river systems and other geographical details. The names and locations of Indigenous tribes living in the tidewater region they called Tsenacomoco are included on the map.

While Smith and his exploring party never found gold, the lost colony, or a passage to the Pacific, they did gather enough information to produce a map that accurately delineated the Chesapeake Bay and the Tidewater region of Virginia. It was one of the first maps to be published in Europe that accurately depicted the bay and the Atlantic coastline. The map shows the Chesapeake Bay and four major rivers: the Powhatan, Pamunk, Tappahannock, and Patowomec, as they were named by the Indigenous tribes. The English renamed the rivers as the James, York, Rappahannock, and Potomac, respectively.

In November 1608, Smith sent several documents to England, including a “Mappe of the bayes and rivers.” In 1611, he engaged William Hole to engrave the map of Virginia to accompany his pamphlet entitled A Map of Virginia. With a Description of the Countrey, the Commodities, People, Government and Religion (1612). Smith's map was the most accurate and detailed map of the Chesapeake Bay and the Atlantic coastline produced in Europe until 1673. It was the basic source for virtually all printed maps of Virginia for more than sixty years and is considered to be one of the most significant maps of colonial America ever published.

Look at it: Look at the map. What geographic area is shown on the map? What features on the map are different from maps we use today?

STEM Stat: Explorers, like John Smith, did not have much information when they arrived in the Tidewater region. What is included in this map? What kinds of things are drawn in detail? What is missing from this map? What can the map tell us and what can it not tell us about this time period?

Analyze: How would this map be useful for people seeking to travel to Virginia or invest in new colonies?

Food For Thought: If you were to draw a map of your home town or city, what would you include and think is important enough to point out to people unfamiliar with the area? 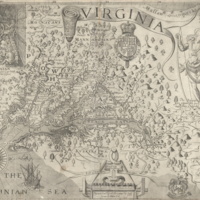 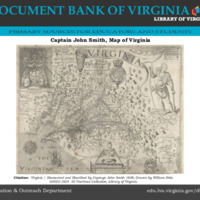