John Mitchell Jr., was the determined and pioneering force behind the success of the Richmond Planet newspaper. Mitchell was born into slavery at Laburnum near Richmond on July 11, 1863. He was the son of John Mitchell and Rebecca Mitchell, who were enslaved by James Lyons, a lawyer and legislator. After his family was emancipated at the end of the Civil War, they remained at Laburnum. Mitchell’s mother taught him how to read and he was able to enroll in school, first at a private school and then at one of Richmond’s public schools, Navy Hill School, early in the 1870s. From 1876 to 1881 he studied at the Richmond Colored Normal School, a high school that specialized in training African American teachers. Mitchell graduated in 1881 as the valedictorian of his class.

Mitchell began his teaching career in Fredericksburg, but returned to Richmond to teach at the Valley School in 1883. A year later the newly appointed school board fired him and 10 other African American teachers. In 1883, Mitchell began writing for the New York Globe and journalism became his focus. In December 1884, at age twenty-one, he became editor of the weekly Richmond Planet. The early years of the publication were a financial struggle, as he edited and published the paper out of his room in a boarding house. The paper soon achieved greater readership and success. Mitchell purchased an electric printing press in 1888 and moved the paper’s headquarters to the Swan Tavern on Broad Street (where the Library of Virginia stands today). The Richmond Planet gained national prominence as an advocate of racial justice and civil rights. The Richmond Planet was a forerunner for other publications and was recognized for Mitchell’s groundbreaking antilynching efforts, which included extensive coverage of lynching cases, lists of lynching victims, and graphic images of lynchings. He also interceded on the behalf of unjustly convicted African Americans by arranging legal counsel, appealing to government officials, and raising funds.

Mitchell used his stature as a "crusading newspaper editor" to propel himself into a political career. In the spring of 1892 he was elected to Richmond's Board of Aldermen from Jackson Ward, and he was re-elected in 1894. He ran for governor in 1921, when African American Republicans named their own ticket in opposition to white Republicans who had excluded them from the party convention. Mitchell’s campaign was controversial and ultimately unsuccessful as he lost the race. Other Black newspapers in Virginia opposed his campaign as they felt it would divide the Black vote.

Mitchell’s troubles continued when the Mechanics Savings Bank that he had established in 1901 fell into crisis in 1922. Mitchell was accused of misusing the bank’s funds. The case was eventually heard by the state Supreme Court, which ruled in his favor and charges were dropped. The community rallied around Mitchell and tried to save the bank while also contributing to his defense fund. Despite their efforts, the bank closed in 1922 and was placed in receivership in 1923. Mitchell was left with no savings and his assets, including the Richmond Planet headquarters, were sold to pay his debts.

He retained the newspaper and continued to serve as editor until his death on December 3, 1929.

Learn more about John Mitchell Jr., in the Dictionary of Virginia Biography here.

Click here for more information about the Richmond Planet.

Look at It: Look at the image from the front page of the Richmond Planet. What does the headline tell you about the subject of the article?

Be the Journalist: What would you write about John Mitchell Jr? Write a paragraph in which you highlight his most significant achievements. Be sure to include why you chose those specific achievements.

Current Connections: What do you think John Mitchell Jr’s legacy is in the fields of education, civics, and journalism? Why do you think his story is relevant today? 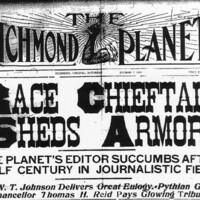 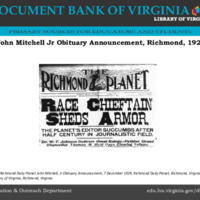