The Richmond Planet was first published in 1882, seventeen years after the end of the Civil War. The thirteen founders (including James H. Hayes, James H. Johnston, E.R. Carter, Walter Fitzhugh, Henry Hucles, Albert V. Norrell, Benjamin A. Graves, James E. Merriweather, Edward A. Randolph, William H. Andrews and Reuben T. Hill) were former slaves who pooled their meager resources to start the Richmond Planet, which was destined to play an important part in shaping the opinions of individuals in Richmond, Virginia, and the nation.

The Planet's first editor-in-chief was Edwin Archer Randolph, a Yale graduate and a leading politician of his day. James E. Merriwether, an educator and civic leader, and E.R. Carter, also prominent in politics, served under Randolph as contributing editors. Reuben T. Hill was selected to manage the paper while the other members of the group, who were mostly employed as public school teachers, made occasional written contributions to the paper.

In 1884, 21-year-old John Mitchell Jr., succeeded Randolph and continued as editor-in-chief for the next 45 years. Mitchell wasted little time; he replaced much of the press equipment, contributed his own artwork to the paper’s impressive design, and increased circulation to the point that the newspaper eventually turned a modest profit. By 1904, the Richmond Planet had reached a weekly circulation of 4,200. The paper quickly gained a reputation as a staunch defender of the African American community and a voice against racial injustice. The paper covered local, national, and international news. However, the paper become known for focusing on segregation, the actions of the Ku Klux Klan, voting rights, and occurrences of lynching. The Richmond Planet became one the South’s most forceful Black voices. The Planet thus reached far beyond Richmond, achieving prominence—and a degree of notoriety—throughout the South.

Under Mitchell, the Planet's masthead, the "Strong Arm" was created. It depicted a flexed bicep surrounded by shock waves that radiated out from a clenched fist, reflecting the force and energy with which Mitchell projected his opinions. Undeterred by people who opposed his work, Mitchell's stories, editorials, and cartoons denounced racial prejudice and exposed those who perpetrated acts of violence against the African Americans.

Look at It: Look at the masthead image. What information does it provide about the issues and people who made up the audience for this publication?

Analyze: Why was the Richmond Planet an important newspaper? How did it influence journalism in its time of publication?

Current Connections:  How does the Richmond Planet continue to influence and inform 21st century journalists and writers? Why does it still hold an important place in newspaper and media history? 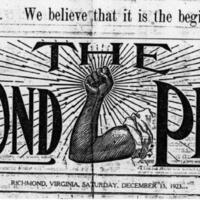 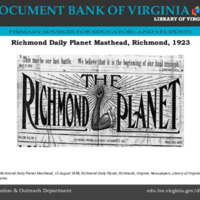