In 1716, by order from Lord Fairfax, Virginia Governor Alexander Spotswood led an expedition over the Blue Ridge Mountains into the Shenandoah Valley. Spotswood traveled with a group of gentlemen, servants, American Indians, and rangers over the Blue Ridge Mountains through Swift River Gap to arrive in the valley. This land was claimed for King George I of England. Eventually this land was divied to gentlemen through land grants. Recipients of the grants were tasked with bringing new immigrants from their home countries in Europe to this area, and were encouraged to use the land for agriculture to stimulate the economy.

Many Europeans, especially Germans and Scots-Irish, were lured to Shenandoah because of the plentiful farmland shortly after Spotswood's expedition. The English were often deterred from moving to the Shenandoah since they were already settled on prosperous farmland in the Piedmont. As the Germans and Scots-Irish began to settle in Shenandoah, small towns began to emerge exuding the cultures of the immigrants. This new farmland was also used to grow agricultural products that could be eaten, unlike the steady flow of tobacco from the eastern portions of the state. The farmland was so plentiful that farmers consistently had a surplus of crops that were sold in markets throughout Virginia.

During the French and Indian War, the settlers in the Shenandoah Valley were constantly aware of the danger surrounding their homes. In 1758, forty-eight prisoners were captured from nearby Fort Valley and most were held captive for three years before returning home to their families.

In Their Shoes: Write a one-page diary entry detailing the journey to discover the Shenandoah Valley. Include at least three facts from the Context section and from the photograph.

Analyze: Compare and contrast the land in the Shenandoah Valley with the land in your community.

Social Media Spin: Compose a tweet of no more than 280 characters that one of the men on the journey would have written when first seeing the Shenandoah Valley. 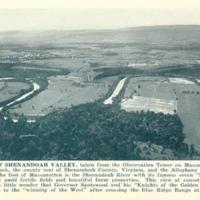 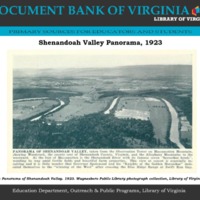