Alexander Spotswood served as Lieutenant Governor of Virginia from 1710-1722. During his tenure as governor, Spotswood hoped to improve security, Virginia's economy, and relations with American Indians. Spotswood passed many acts, including the Tobacco Inspection Act of 1713, and the 1714 Indian Trade Act, to win over his constituents and gain support from the House of Burgesses and the Governor's Council. Under the Tobacco Inspection Act, Spotswood appointed fifty inspectors to inspect tobacco before it was sent to Europe. Of the fifty inspectorships, twenty-nine were granted to burgesses in an attempt to win their support. Unfortunately, his plan backfired because farmers did not want their crops to be inspected. This resulted in the burgesses losing re-election and their seats in the House of Burgesses.

To improve relations with American Indians, Spotswood led an expedition in 1716 across the Blue Ridge Mountains and into the Shenandoah Valley. He claimed this land for the King of England and the land was eventually used as a buffer against the French and American Indians in the 1730s. This land was also used in grants Spotswood provided to persuade Englishmen to move to Virginia. Spotswood established the settlement of Germanna, which eventually became a frontier outpost.

Due to an unstable relationship with the Governor's Council and the House of Burgesses, Spotswood was replaced as Governor of Virginia in 1722 by Hugh Drysdale. Among his political achievements he also left behind an architectural influence, having introduced the Georgian style to portray wealth and power when he designed the Governor's Palace and rebuilt the College of William and Mary. Alexander Spotswood served as deputy postmaster general from 1730 until his death in 1740.

Political Plans: Alexander Spotswood tried to improve his relationship with the House of Burgesses and the Governor's Council by passing different acts. What are some other areas he could have tried to improve during this time period?

Virginia Validation: In a time when colonists were becoming unhappy with British control, Alexander Spotswood attempted to appease the King. If he wanted the colonists' support, why would he conform so closely with the British government?

Artistic Exploration:  Looking at the portrait of Alexander Spotswood, briefly describe three things you notice about his portrait;  what can we infer from Spotswood's posture, his clothes, his facial expression, what he holds in his left hand, what is in the background of his portrait? 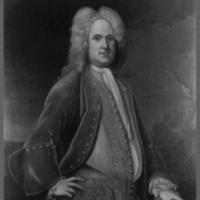 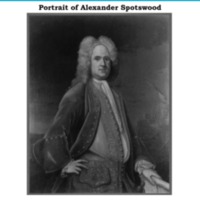