This is an oil painting of Sir William Berkeley by Hariotte L.T. Montague. This painting was based on the work of England's Sir Peter Lely, a prominent portraitist in the seventeenth-century court who painted King Charles II, Oliver Cromwell, and others.

William Berkeley was the longest-serving governor of Virginia. He served as a Crown governor (an appointee of the King of England) between 1642 until 1652 and again from 1660 until his death in 1677. In his late twenties, Berkeley was a part of an exclusive literary circle that orbited the royal family -- he wrote several plays and received rich rewards from the monarchy. Tensions pushed England into the British Civil Wars and Berkeley, using his literary connections, persuaded both King Charles and Sir Francis Wyatt to appoint him the next governor of the Virginia colony.

After he was appointed in 1642, Berkeley advocated economic diversification and promoted trade between the colonists and the Virginia Indians. He allowed the two houses of the General Assembly to develop into a mature parliamentary body that legislated in the interests of the great planter families who dominated Virginia politics throughout much of the colonial period. He also promoted British expansion and sent out Edward Bland to scout areas beyond the Virginia frontiers – Berkeley even did some exploring himself.

Berkeley’s initial governorship ended in 1652, when England’s monarchy fell and was briefly replaced by a republic -- Berkeley openly voiced his support for the monarchy. When the republic sent ships to ensure the colony’s compliance with its new leader, Oliver Cromwell, Berkeley surrendered but managed to persuade his successor to ignore the commands that he relinquish all of his property and leave the colony.

He regained the governorship in 1660, although the term was marked with disaster. Attempts to diversify the economy in Virginia failed and resulted in higher taxes, which caused many to doubt if Berkeley’s ideas were viable. He also faced decreasing support and influence with the British royalty, which had since been restored to the throne. Relations with the Indians were strained at best and attacks on the colony were not uncommon. To make matters worse, Berkeley’s haughty demeanor led to many colonists expressing doubt over his ability to lead.

This tension came to a head in July 1675 with Bacon’s Rebellion, which was launched by Nathaniel Bacon in response to an Indian attack against a plantation. Berkeley handled the situation poorly and became the focus of Bacon’s ire, provoking the man to seek to wrest control of the colony from the governor. Although the rebellion lost traction after Bacon died in October 1676, Berkley’s superiors in England were unimpressed and in 1677 a commission was sent to Virginia to remove him from office. Initially reluctant to relinquish his position, Berkeley eventually agreed to return to England, hoping that he could persuade King Charles II to reconsider. However Berkeley grew ill during the crossing, which led to his death on July 9, 1677, before he could successfully regain his office.

Analyze: What kind of impact did Berkeley have on Virginia?

Artistic Exploration: Create your own image/interpretation of William Berkeley.

In Their Shoes: Imagine you are a colonist in Berkeley's Virginia during the 1660s. How do you feel about Berkeley and why?

Political Plans: If you were governor of Virginia, how would you have done things differently than Berkeley? 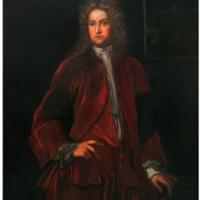 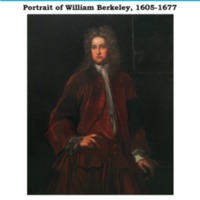