Final Meeting of the House of Burgesses, 1776

On 6 May 1776, during the sixteenth year of the reign of King George III, assistant clerk Jacob Bruce made the last entry recorded in the official journals of the Virginia House of Burgesses, an assembly of elected representatives from Virginia that met from 1643 to 1776.

The clerk, George Wythe, was absent in Philadelphia representing Virginia in the Continental Congress. With the prospect of revolution looming over the colonies, Bruce wrote that “Several Members” of the House of Burgesses met in the Capitol in Williamsburg in response to the order of adjournment adopted on 7 March 1776. Symbolically caught between an age then passing and another not yet begun, the legislators seemed somewhat at a loss -- they “did neither proceed to Business” nor formally adjourn as a House of Burgesses. One of their fellow members, Edmund Pendleton of Caroline County, explained to the members of the colonial legislature that by not setting a date for another meeting, they would intentionally “let that body die.” The long-standing legislature as a part of the colonial empire in North America was, as Bruce expressed in his brief account of the day’s deliberations, simply “finis.”

Analyze: Why do you think that the legislators chose to end the House of Burgesses by not setting another meeting date and not formally adjourning?

In Their Shoes: Make a list of possible topics from the past and future that might have been discussed in this last meeting.  Justify your choices. 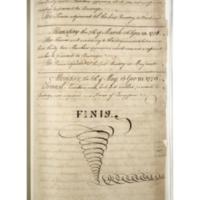 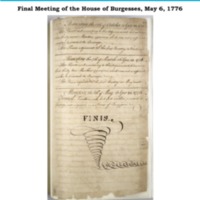 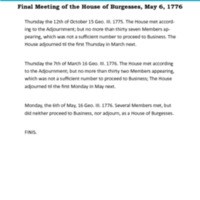