Pocahontas (also known as Matoaka, Amonute, and Rebecca) was an Indian and one of the daughters of Indian chief Powhatan. She is known for a historical anecdote where she reportedly saved the life of the English explorer John Smith in 1607, during which time she would have been about ten or eleven years old. Smith, who had been captured by one of Powhatan’s relatives, stated in several reports that he was to have been clubbed to death by Powhatan but was rescued at the last moment by Pocahontas placing her head on his.

The accuracy of the account has been questioned as early reports by Smith put a markedly decreased emphasis on the danger of his capture and placed his initial meeting with Pocahontas at a much later date. Years later Pocahontas would be reunited with Smith in England when she traveled there with her husband John Rolfe, whom she married in 1614. She bore him one son, Thomas. Pocahontas never returned to her homelands and died in England in 1617.

Citation: At Jamestown, the site of the first permanent English settlement in America, has been erected a statue to the Indian princess Pocahontas, by William Ordway Partridge, 1939, Virginia New York World’s Fair Commission, Library of Virginia Special Collections Prints & Photographs.

Analyze: Do you believe that the account of Pocahontas saving Smith’s life really happened? Why or why not?

In Their Shoes: Write a short story about Smith’s capture and release from the viewpoint of Pocahontas, John Smith, or Powhatan.

Artistic Exploration:  Examine the statue of Pocahontas, her size, dress, and posture.  What, if anything, can you infer from these attributes?  Be specific. 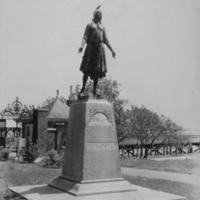 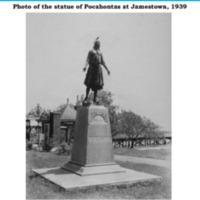