The Racial Integrity Act was introduced in 1924 in the General Assembly as Senate Bill No. 219, then as House Bill No. 311. When the act was passed, it prohibited interracial marriage and defined a white person as someone "who has no trace whatsoever of any blood other than Caucasian." The act was passed to preserve “whiteness” against race-mixing and required that individuals fill out a certificate of racial composition. Originally, the act required that all individuals register their race, but many white Virginians did not want to do so. The act changed the requirement for individuals born before June 14, 1924, and the completion of certificates would be voluntary. In addition, the cost to register was placed on the individual, not the state.

When the act was introduced, persons with traces of American Indian ancestry were still granted the right to marry white individuals -- this exception came about as some prominent white elites claimed to be descendants of Pocahontas and John Rolfe. During that time, a white person was defined as an individual who had less than one sixty-fourth part Indian and no African American heritage. The law was later revised and changed the definition of whiteness in Virginia a "whose blood is entirely white, having no known, demonstrable or ascertainable admixture of the blood of another race.” The Racial Integrity Act remained law until 1967 when the U.S Supreme Court found it unconstitutional in the Loving v. Virginia case.

Richard and Mildred Loving were from Caroline County, Virginia. After a long courtship, they decided they wanted to be married. On June 2, 1958, Richard and Mildred Loving traveled to Washington, D.C. to obtain a legal marriage. They then returned to Virginia where interracial marriages were illegal. On July 11 of the same year, a warrant for their arrest was issued stating they broke the law by obtaining a marriage license in violation of the Racial Integrity Act. They were found guilty and were told to leave the Commonwealth of Virginia for 25 years. They could only return to visit family if they traveled separately and were not in the Commonwealth at the same time. They coupe moved to Washington D.C. and lived there for five years before deciding they wanted to return to Virginia. After returning to the state to visit family, the couple was arrested again and released on bail. They took action to challenge the Racial Integrity Act on Constitutional grounds. They wrote a letter to the United States Attorney General Robert Kennedy, asking for his help. Kennedy then referred Mildred Loving to the American Civil Liberties Union (ACLU) for further assistance. In June 1963, Bernard Cohen, an ACLU attorney took up their case and a few months later, Philip Hirschkop, a lawyer who had been working on civil rights cases in Mississippi also joined the Loving’s legal team. The case was appealed all the way to the United States Supreme Court, where Cohen argued that the Racial Integrity Act violated the Lovings’ rights to due process. On June 12, 1967 the ruling in Loving v. Virginia was unanimously in favor of the Lovings stating that the Racial Integrity Act violated the Fourteenth Amendment.

The article published in Life Magazine on March 18, 1966, was written on the Lovings legal situation following the Virginia Supreme Court decision to uphold the 1924 Racial Integrity Act. Life Magazine was a national publication and brought the issue of interracial marriage in Virginia to the attention of people across the country.

Look At It: Look at the headline and images. What might be the subject of the article?

Think About It: Why do you think it took 43 years to overturn the Racial Integrity Act and allow interracial marriage in Virginia?

Current Connections: How is the right to marry the one you love still relevant today? Do challenges to marriage equality still exist today? Explain. 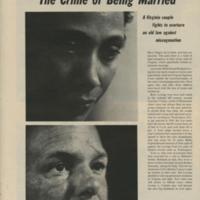 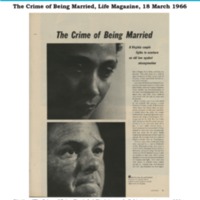