Don't Go Back and Backward with Republicans, Broadside, 1936

The 1936 election came on the heels of FDR's second New Deal. This second round of programs included the Social Security Act and the Works Progress Administration. The Democratic Congress also passed tax revision, raising tax rates for those with large incomes and for large corporations. While popular with many Americans, New Deal policies found enemies in the Republican Party, far-left political figures, and most notably the figures of Father Coughlin and Huey Long.

The Democrats were not only able to campaign on the successes and popularity of New Deal policies, but also on the mistakes and failures of previous Republican administrations, as in this broadside. In a veritable landslide loss, Alfred M. Landon, the Republican challenger to FDR received only 8 electoral votes, carrying only Maine and Vermont.

Analyze: Explain the "wolf in sheep's clothing" imagery. Why do you think this may have resonated with 1930s Americans?

Analyze: How fair are the descriptions of the Republican policies outlined in this broadside? Is there any clear bias or spin seen in the text?

Social Media Spin: Create a hashtag to match this broadside and a tweet for each of the policies that the Democrats focus on in their theme of "going back." 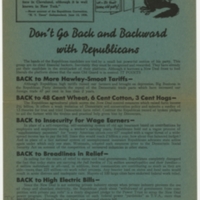 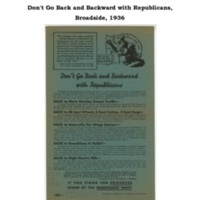