CONTENT WARNING: Materials in the Library of Virginia’s collections contain historical terms, phrases, and images that are offensive to modern readers. These include demeaning and dehumanizing references to race, ethnicity, and nationality; enslaved or free status; physical and mental ability; and gender and sexual orientation.

The portrait of Mary Willing Byrd was painted in the early 1770’s by artist Matthew Pratt. After placing three advertisements for a portrait artist in the Virginia Gazette, William Byrd hired Pratt to paint a portrait of his second wife, Mary Willing Byrd. Mary Bryd was the Goddaughter of Benjamin Franklin and was born in Philadelphia in 1740. She met and married her husband while he was serving in the French and Indian War. William was accused of being loyal to the British and was heavily in debt. He committed suicide in January, 1777.

The death of her husband left Mary Willing Byrd debt-ridden and faced with the difficult task of satisfying creditors while preserving an inheritance for their ten children. Mary Byrd attempted to remain neutral during the American Revolution and thereby preserve her property for her children while retaining the wealth to which the family was accustomed. Both British and patriot forces raided Westover Plantation, the Byrd family estate located in Charles City County. After trying to negotiate with the British for a return of her property, American patriots charged her with trading with the enemy. Mary Byrd eloquently defended herself, and charges were dropped. Mary Byrd died in March of 1814 having successfully saved her family estate.

Today two portraits of Mary Willing Byrd survive, one located is at the Library of Virginia and the other located at the Virginia Museum of History & Culture.

Take a Look: The portrait of Mary Byrd provides many clues to her status and wealth. Write a few sentences about what you believe to be her social status. Use examples from the portrait as part of your explanation.

Analyze: What can Mary Byrd's story tell us about the position the war left some women in? Would it have been earlier of more difficult for a woman with Mary Byrd’s social status? Explain.

Artistic Exploration: Produce a portrait of Mary Willing Byrd that you think represents her story. You may create the portrait using any artistic means you wish. Feel free to use symbols in your portrait to represent her status and struggle.

Another Perspective: If you were Mary Byrd, how would you try to preserve your property? Would you choose a side in the war? Would you stay neutral? What would influence your decision. 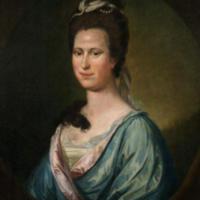 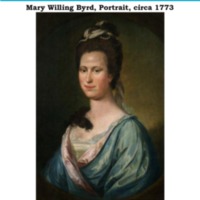