An Act Freeing Enslaved Peoples Who Served as Soldiers, 1783

CONTENT WARNING: Materials in the Library of Virginia's collections contain historical terms, phrases, and images that are offensive to modern readers. These include demeaning and dehumanizing references to race, ethinicity, and nationality; enslaved or free status; physical and mental ability; religion; sex; and sexual orientation and gender identity.
-
Free and enslaved Black people were on both sides of the American Revolutionary War. Many leaders, including George Washington, were largely lukewarm to the thought of recruiting enslaved people for the war, whereas the British side fully embraced this idea. Due to the British offering freedom, thousands of enslaved people who were the property of Patriots fled to join the Loyalists.

Many enslaved people who fled to the Loyalist side were reclaimed by their Patriot slaveholders. The General Assembly acknowledged that every enslaved person who “contributed towards the establishment of American liberty and independence” was, in turn, entitled to their own freedom.

Analyze: Why would the Patriots be reluctant to allow enslaved people to join their army?

Analyze: Why would the British offer freedom to enslaved people?

Analyze: What are some potential challenges for the newly freed soldiers? Does the offer of freedom apply to their families too? 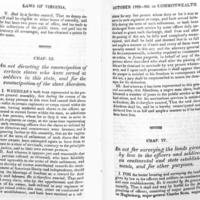 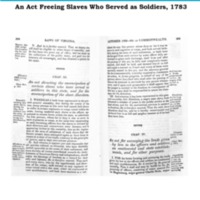