This photograph depicts a marble statue of George Washington, our nation’s first President. The statue was created by Jean-Antoine Houdon and is located in the Virginia State Capitol.

Washington was born in 1732 in Westmoreland County, Virginia to a relatively prosperous family. A little more than twenty years later Washington would take part in the French and Indian War, where he began to distinguish himself as a man of honor and bravery. In the years following the war Washington married his wife, Martha, and helped raise her children from her previous marriage, but was never able to father children of his own. During this time Washington was also a planter and managed to successfully grow and sell a multitude of crops, including tobacco and wheat.

However, as the American colonies began to grow in autonomy, Great Britain began trying to exert more and more control until it became obvious that there was a choice to make: continue to live under Britain’s rule or choose freedom. Washington was vocally opposed to Britain’s policies and at one point even went so far as to propose a boycott of all English goods. With his leadership skills, intelligence, and charisma, it made sense for him to serve as a delegate to the First Continental Congress, and when the nation went to war, he stood out as one of the most authoritative figures during the Revolutionary War.

Washington’s next move was to preside over the Constitutional Convention in 1787. While he did approve of the Constitution, Washington chose not to cast his vote in favor of ratification because he knew that he was to be nominated for President. On April 30, 1789 Washington was inaugurated as the first President of the United States. He did well in the position, so much so that he was unanimously re-elected in 1792. His actions set several standards for the Presidency, one of which was that a president should only run for two terms. Washington died at his home on December 14, 1799.

Current Connections: Discuss with a partner the role of the U.S. president and create your own presidential campaign followed by a class election.

Current Connections: Write a class letter to the current president. Some topics might include:
• describing what you would do, as a class, if you had the job
• asking a question about current events
• offering support on a decision

Artistic Exploration: Look at the statue of Washington and examine his dress, posture, facial expression, and the various objects also incorporated into the statue. From this statue, what can you conclude about Washington the man and Washington the legend? 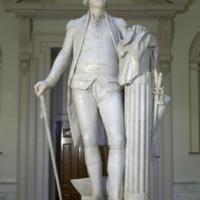 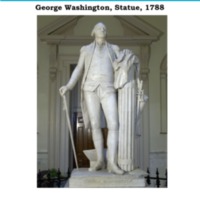