In the 17th Century, Anthony Johnson of Northampton County, was one of only a few documented Black landowners in the Virginia Colony. Anthony arrived in the Virginia Colony in 1621. He was likely from Angola and was renamed “Antonio” after he was captured. The renaming of Africans to Portuguese, Spanish, and, later, English names was not an uncommon practice. Anthony became an indentured servant after reaching the Virginia Colony. He was, like all indentured servants at that time, required to serve a landowner for a specific length of time before being granted freedom.

In the early 17th Century, Indentured servants were able to earn money, own livestock, and raise their own crops. The early English settlers were not opposed to the idea of freeing their indentured servants and many saw it as a goal for the colony. Once freedom was given, the person could acquire land and make a profit off their land. The concept of indentured servitude was broad in that time and was not based strictly on race. Indentured servants could be granted their freedom, or they could self- purchase or buy their freedom. Anthony Johnson was one such individual.

In 1651, Anthony purchased his freedom from the Bennet family. With his wife, Mary, and their children, they would become a landowner on the Eastern Shore. Records show that the Johnson owned at least one indentured servant. In 1655, John Casar had a disagreement with Johnson over his indentured status. Casar claimed that the terms of his contract had run the agreed to seven or eight years and that he had served another seven years beyond his original obligation to Johnson. He argued that he met the terms of the contract and should be set free. The Northhampton County Court ruled in favor of Johnson finding that Casar had run away and claimed to be an indentured servant, but he was Johnson’s slave for life. In the same court case, Johnson’s neighbor, Robert Barker, a white planter, was charged with helping Casar with his petition to be freed from his indenture. The court ordered Parker to pay Johnson’s court costs.

By the 1660’s, the circumstances of being a free Black person in the Virginia Colony became more difficult. The Johnson family decided to sell their farm and relocate  to Somerset County on the Eastern Shore of Maryland. There they owned land and restarted their farm. Anthony Johnson died in 1670. Casar's status remains unknown.

Scan It: Scan the document. What phrases stand out to you? What do you think is the purpose of this document?

Form an Opinion: Based on your understanding of the case, how do you feel about the outcome? Was the court’s decision correct? Explain.

Social Media Spin: Write a social media post in which you describe the circumstances of the case to a modern audience. Keep in mind the differences in 17th Century and 21st Century terminology. For example, the differences between an indentured servant and an enslaved person. 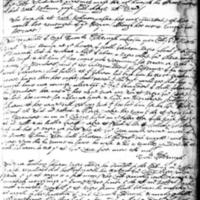 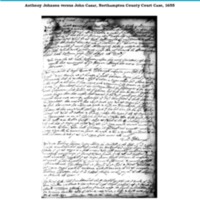