King James I, His Counterblast to Tobacco, 1604

James I (1566–1625) was the king of Great Britain from 1603 until his death in 1625. The first English ruler from the House of Stuart, he succeeded Queen Elizabeth I after her death. He was the first British monarch to rule both England and Scotland.

In 1604, King James I issued a treatise entitled King James His Counterblast to Tobacco. The treatise would be reprinted in 1674 as tobacco had become a major cash crop in the Virginia colony. In this treatise, King James I gave various reasons for his strong dislike of tobacco, which he meant to counteract several of the then-common reasons for tobacco usage.

Europeans had been exposed to tobacco as early as 1560 and used it primarily as medicine. In the following decades, tobacco use among Europeans increased not only for medicinal purposes, but for recreational reasons as well. For many rulers in Europe, including King James I, tobacco smoking represented serious social implications and health issues. English leaders did not make the sale and smoking of tobacco illegal, although many other European countries did. Instead, King James I tried hard to reduce tobacco usage, even instituting a 4,000 percent tax hike on tobacco in 1604. The price increase, however, did little to reduce English demand for the “noxious weed.”

The attitude of the king and members of England's ruling classes changed when tobacco became a cash crop for its colonies. During the early years of English exploration and settlement of North America, only a small amount of tobacco was cultivated and exported. In 1604, when King James I issued this statement, the main suppliers of tobacco to the English were foreign shippers. Not until the 1620s did the English colonies of Virginia and Maryland begin to grow and export tobacco in large quantities. Accepting the inevitable, King James I decided the Crown might as well cash in on the popularity of tobacco and the state took control of the industry. Ironically, tobacco cultivation would lay the foundation for the success of England's American colonies.

Scan it: Scan the document and list four words or phrases which stand out. What do these word or phrases tell you about King James I and his thoughts about tobacco?

Up for Debate: Discuss government regulation of tobacco. Argue for or against legalizing other drugs since tobacco and alcohol are both legal. Assign sides and hold a debate.

Analyze: Compare and contrast King James I's Counterblast to a modern-day Surgeon General's warning on tobacco and smoking. Today the emphasis is on the damage the drug does to a person's body and health. While King James certainly touched on that issue, to what else did he appeal? 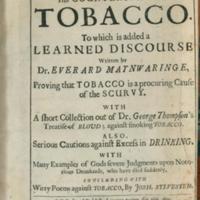 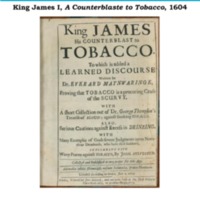 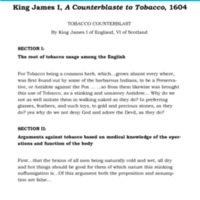