An Act to Care for Those Disabled by Native Attacks, 1644

White English colonists and Natives were openly viiolent to each other for much of the early seventeenth century. A few months prior to the passing of this act, the Third Anglo-Powhatan War started, resulting in many deaths and injuries on both sides. This act looks to address the problem of what should be done to adequately provide for those who were injured and incapacitated from battle.

Analyze: What can this act tell us about race relations at the time?

Current Connections: Who is responsible for the care of injured veterans now? Has this changed from the 17th century?

In Their Shoes: If you were an able-bodied colonist during this time, why or why wouldn't you support this act? 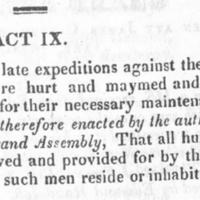 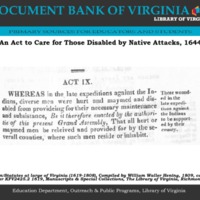