CONTENT WARNING: Materials in the Library of Virginia’s collections contain historical terms, phrases, and images that are offensive to modern readers. These include demeaning and dehumanizing references to race, ethnicity, and nationality; enslaved or free status; physical and mental ability; and gender and sexual orientation.

Women served in many capacities during the American Revolution. The women, called camp followers, often traveled with their husbands who were serving in the Continental Army. Camp followers did not stay in the Army encampments but set up camps nearby. In their camps, the women served in several capacities. The did laundry, cooked, mended clothing, and assisted with medical treatment when necessary. Another role of the camp followers was to go onto the battlefield to provide the troops water to cool the canons and for the men to drink, particularly on hot days. The name “Molly Pitcher” is a generic term with “Molly” being a nickname for Mary, a common name during the time, and “Pitcher” describing tasks done by women such as fetching water.

According to legend, Molly Pitcher was a women who was said to have been a camp follower who was bringing water to the troops during the Battle of Monmouth. Molly’s husband died during the battle and she took his place firing the artillery piece. A cannon ball from the opposing side landed between her legs, missing her body by mere inches. Undaunted, she continued firing the cannon for the rest of the battle. The story may or may not be true. However, it is an example of the heroism of women during the American Revolution.

The woman most associated with the story of Molly Pitcher is Mary Ludwig Hays McCauly. Mary’s husband, William, enlisted in the Continental Army in 1776 and died in 1798. Mary remarried and eventually applied to receive a pension as the wife of a soldier. In 1822, Mary received an annual grant of $40 for “services rendered”. Although the services were not specified, the annual grant was unusual and implies that she did something of significance during the American Revolution. It is unknown if the story of Molly Pitcher is referring to one woman or if it could also be a composite figure of various women who served in a variety of roles during the war.

Artistic Exploration: Look the drawing of Molly Pitcher at the cannon. Notice the posture and facial expressions of the soldiers around her, what can you conclude about her actions and role in the battle?

Artistic Exploration: Draw cartoons or images of Molly Pitcher taking on various roles that women might have during the Revolution.

Another Perspective: Write a diary entry for a day in the life of Molly Pitcher or a camp follower. What did you do? What challenges did you face? Any victories? 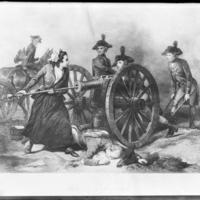 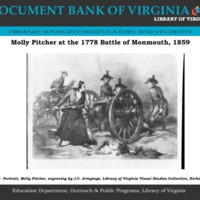