The Southern Illustrated News was printed in Richmond from 1862 to 1865. The cartoon lampoons Lincoln’s revolving door of generals that had faced—and lost to—Southern armies in Virginia. After General Winfield Scott retired at the beginning of the Civil War, a number of generals had been placed at the head of the Army of the Potomac or in charge of armies attempting to secure the Valley of Virginia. The “toys” have been stripped of the army general uniform which now resides with Lincoln’s latest puppet “Fighting Joe” Hooker.

The generals depicted are:

Irvin McDowell: lost the Battle of Bull Run/Manassas in 1861

George McClellan: failed to beat Lee in the Seven Days Battles around Richmond in 1862 or follow up on a marginal victory at Antietam/Sharpsburg later that year.

Ambrose Burnside: lost the Battle of Fredericksburg in 1862

Joe Hooker: Given command of the Army of the Potomac in late 1862. Two months after this cartoon appeared, Hooker suffered one of the North’s greatest defeats of the war, the Battle of Chancellorsville.

Analyze: Explain the imagery and title of the cartoon as a tool of criticism. How would the same turnover rate of generals be depicted in a Northern publication?

Current Connections: Find a political cartoon from recent years that tackles presidential staffing and/or decision-making. What are the similarities and differences in imagery and style? 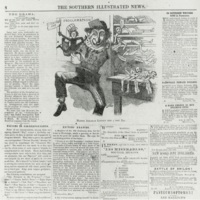 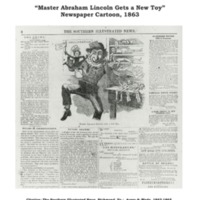