The Great Depression and post-war eras saw advances in the labor movement in the United States. Many of the efforts were
spurred by the economic hardships of the Great Depression and the U.S. government's response, the multiple programs of President Franklin D. Roosevelt's New Deal. The National Labor Relations Act and Social Security Act passed, and the Committee for Industrial Organization (CIO) was formed within the American Federation of Labor (AFL). The Fair Labor Standards Act established a minimum wage and a 40-hour week.

After the Great Depression, difficult economic times engendered an increase in strikes, such as the one in this image. In an effort to preserve individual employee rights in a town largely controlled by industry, Hopewell plant workers joined labor unions such as District 50 of the United Mine Workers of America (UMWA). The UMWA’s stated purpose was to address the lack of continuity of employment, limited access and ownership in company-owned towns, and extreme occupational hazards. These factors led to regular strikes and efforts to improve conditions through collective bargaining. Read more from Multiple Exposure.

Up for Debate: Research the AFL and CIO and strike history in United States labor. Do you think striking is an effective and appropriate means of labor reform?

In Their Shoes: If you were a worker at the time, would you have decided to strike for better conditions at the risk of losing a paycheck? How bad would conditions have to be for you to strike?

Artistic Exploration: Look carefully at the photo of the men on strike and the objects around them. What can you conclude about the six men featured? What do you notice about the barrel and wood in the photo and what might they have been used for and why? 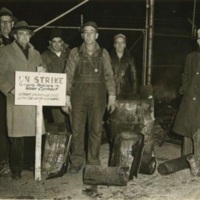 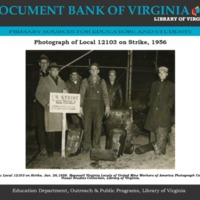