Invitation to the formal opening of the Jamestown Tercentennial Exposition, 1907

In 1907, Virginia honored the 300th anniversary of the English settlement at Jamestown with an exposition. Modeled after many national fairs of the era, the Jamestown Ter-centennial Exhibition contained exhibits, representative buildings of the various state houses, government buildings, restaurants, and an arcade. African Americans and American Indians were represented as well. It was a huge undertaking and considered very costly at the time. In addition to the tourists who attended, the exposition was visited by dignitaries such as President Theodore Roosevelt and author Mark Twain.

Citation: The officers and directors of the Jamestown Exposition request the honor of your presence..., Jamestown, Va., 1907. Broadside 1907 .J3 BOX, Special Collections, Library of Virginia.

Artistic Exploration: Create a brochure advertising the sights visitors might see at the exposition.

Artistic Exploration: Look at the invitation to the Exposition. What do you notice about the invitation's wording, capitalization, and use of color? To what extent does this invitation reflect the 17th century, and not the 20th? Why do you think that was a choice for the invitation designers? 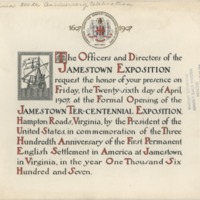 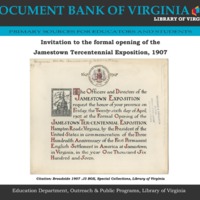