Maggie Lena Walker was an African American woman who became a banker, business leader, and social reformer. She was the first woman to establish and become the president of a bank in the United States. Walker was born in 1864 in Richmond, Virginia. Maggie’s mother, Elizabeth Draper, was a former enslaved person who worked as an assistant cook for Elizabeth Van Lew, a wealthy white woman, abolitionist, and spy for the Union during the Civil War. While at the Van Lew estate, Draper met an Irish American abolitionist writer, Eccles Cuthbert, who was Maggie’s biological father. Draper later married William Mitchell, a butler at the Van Lew estate. The two had a son together in 1870, Maggie’s half-brother, Johnnie. Maggie went to school in Richmond at the Lancaster School and later graduated from the "Richmond Colored Normal School" in 1883. Following graduation, she returned to the Lancaster School as a trained teacher and taught for three years until she married Armstead Walker Jr. in 1886. Due to a school policy, as was standard for the time, Maggie Walker retired from teaching once she was married.

In 1881, Walker joined the Independent Order of Saint Luke, a fraternal organization which identified and provided for the needs of African Americans. After she left the Lancaster School, she rose through the ranks of the organization while using her position to encourage young Black students to continue their education and serve the community. When she became president of the organization, it was debt-ridden and on the verge of bankruptcy, but Walker transformed it to a well-resourced entity, and within five years the Saint Luke Penny Savings Bank opened for business after a successful letter writing campaign for donations and working as a community to furnish the building.

After the economic downturn during the Great Depression, Walker and the other bank leaders were forced to merge with two other banks to become Consolidated Bank and Trust. In her later years, Walker was faced with health issues that confined her to a wheelchair. Walker remained president of her bank until December 15, 1934 when she died from diabetic gangrene. Today Maggie Walker's former home at 110 ½ East Leigh Street is a National Historic Landmark (designated in 1979) and is maintained by the National Park Service.

Scan It: Scan the letter. Identify and list any word which stand out to you and explain what you think they may indicated about the subject of the letter.

Analyze: Re-read Maggie Walker's letter asking for donations to the Saint Luke Furniture Fund.  What is the tone of the letter?  What language does Walker use to make her appeal direct and powerful?

Art Exploration: Create an advertising poster for the Saint Luke Penny Savings Bank that would encourage members of Maggie's community to save and invest in her banking venture. 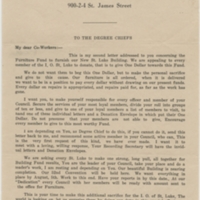 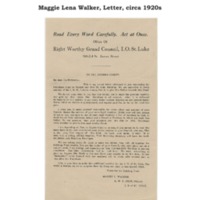