In May 1861, the Union Army held control of Fort Monroe located long the Chesapeake Bay in Hampton, Virginia. Major General Benjamin Butler decreed that escaping enslaved people who reached Union lines would not be returned. Many enslaved people flowed towards Fort Monroe in their quest for freedom. A refugee camp was built to house the newly freed people and it became the first self- contained African American community in the Untied States. To provide those living in camp with an education, Mary Peake, a free woman of color, was asked to teach despite a law enacted in 1831 which forbade the education of enslaved people, free Blacks, and those of mixed races. Mary held her first class on September 17, 1861, under an oak tree. The tree would become known as the Emancipation Oak as it was the location of the first reading in the South of the Emancipation Proclamation in 1863. The Emancipation Oak can still be found on the Hampton University campus today.

Hampton Institute was founded in 1866 as Hampton Normal and Agricultural Institute by Brigadier General Samuel Chapman Armstrong, to train Black teachers. The Freedman’s Bureau was instrumental in providing financial support. The Bureau of Refugees, Freedmen, and Abandoned Land (Record Group 150), also known as the Freedman’s Bureau, was established by an act of Congress in 1865. The Bureau supervised and managed all matters related to refugees, freedmen, and lands abandoned or seized during the Civil War. Documentation was a primary goal of the Bureau, but they were also known to provide support for educational institutions and organizations with monetary donations.

The primary goal of Hampton Institute was to educate Black students as leaders and teachers in their communities. The school became well-known across the South for training educators like Booker T. Washington. In 1878, Hampton's mission expanded with the admission of Indigenous students. The growth of the school and increasing enrollment numbers created a financial strain. The school became more dependent on benefactors. As the school grew and more attention was given to the successes of the students, there was push back and threats made by white people who did not support the mission of the school. The photograph taken in 1907, shows several young men who were attending classes. Many of the classes taught would have been related to trades such as farming, carpentry, harness making, printing, tailoring, clocksmithing, blacksmithing, painting, and wheelwrighting.

Despite many challenges and push back from certain members of the white community, the school became recognized as a college in the 1920s and achieved university status in 1984.

Look at It: Look carefully at the photo of the four men at Hampton. What aspects of photograph stand out to you? Why?

Think About It: Why do you thin Mary Peake was asked to teach classes even though there was a law stating that former enslaved people could not receive an education? What risks did she take in teaching those classes?

Be the Journalist: Imagine you are a journalist in 1907 and plan to interview the men in the photograph. What questions would you ask? Why would you ask those questions? Explain. 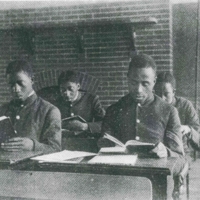 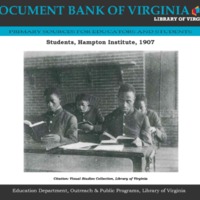