Between 1877 and the mid-1960s, authorities enforced racial segregation throughout Virginia. In 1902, the Virginia State Constitution, authorized by the Virginia General Assembly, instituted a poll tax in which all Black and persons of color would have to pay as prerequisite to being able to vote. Virginia was among the last five states to remove the poll tax. However, after the 24th Amendment to the US Constitution was passed in 1964, Virginia still allowed for the collection of poll taxes and literacy tests prior to being able to vote in a federal election. In this era, the state also mandated segregation in schools.

Virginia's poll taxes remained in effect until the 1960s and ended, in part, due to the efforts of Evelyn Thomas Butts a 41 year old Black community activist, mother of three and grandmother who was married to a disabled veteran and worked as a seamstress. In November 1963, Evelyn Thomas Butts and her attorney Joseph A. Jordan Jr. filed the first suit in a federal court seeking to have the poll tax declared unconstitutional. She argued that the poll tax put an unfair financial burden on citizens in the exercise of their constitutional rights of citizenship, which violated the Fourteenth Amendment's Equal Protection Clause. In March 1964, Annie E. Harper and a group of people from Fairfax County filed another federal suit against the poll tax. The two cases were later combined. On March 24, 1966, the United States Supreme Court ruled in the combined cases called Harper v. Virginia State Board of Elections that the use of a poll tax in all elections was a violation of the U.S. Constitution. The decision ended the use of the poll tax in Virginia and a provision of the Virginia Constitution was added 1971 which explicitly prohibits requiring payment of a poll tax as a prerequisite to be able to vote.

Using Context Clues: Quickly look through the article, what word or phrases stand out to you? List five. What do those words or phrases tell you about the subject of the document?

Current Connections: What challenges and changes are being made today that may impact voting rights?

Social Media Spin: If reporters had been on social media in 1966, how might this article and issue have been presented? Create a social media post reflecting how you would have presented it at that time.

Virginia Validation: Why do you think it took a legal case that reached the Supreme Court to change the law requiring a poll tax? How did the changes to the state law reflect the Supreme Court decision and the US Constitution? 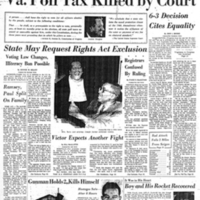 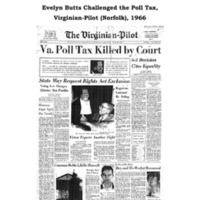 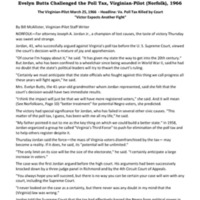