John Glenn was a veteran of World War II and the Korean War. In 1957, he set a new speed record for traveling from Los Angeles to New York. It was his involvement in the U.S. Space Program, however, that earned him the most fame and a place in American scientific history and pop culture. As a member of the "Mercury 7," Glenn and his team played a role in the U.S. space race against the Soviet Union. Glenn's most significant contribution to this race occurred on February 20, 1962. As pilot of the Friendship 7, Glenn orbited Earth three times, becoming the first astronaut, or cosmonaut, to do so.

In Their Shoes: If you were poet Murrin, who would you write about as a hero for your generation?

Up for Debate: The Space Race played an important role both in technology and in the Cold War between the U.S. and the U.S.S.R. Should the U.S. have focused more time/money/resources on other endeavors?

Artistic Exploration: Design a commemorative illustration/poster etc. that may have accompanied Murrin's poem.

Analyze: "The Space Flight" is not a professional artistic work but that of a citizen honoring a notable event. To what extent, however, does this poem reflect what you know about standard poetic form, language, and meter, and how effective do you think the poem is? 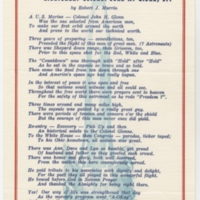 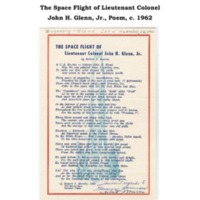