A grandson of slaves, Lawrence Douglas Wilder (1931–) was sworn in as governor of Virginia on January 13, 1990. Wilder made history in 1985 when he became the first African American elected to statewide office, and was sworn in as lieutenant governor in 1986. In 1989 he was the nation's first elected African American governor. Witnesses to the inauguration were the new governor's daughter, son, and daughter-in-law (flanking him in the photo). Retired United States Supreme Court Associate Justice Lewis F. Powell (1907–1998) administered the oath of office, and behind Wilder (clapping) is retiring Virginia Governor Gerald L. Baliles (1940–).

Art Exploration: Design a poster or button to commemorate this event.

Social Media Spin: Create tweets that could have been sent.

Analyze: Former Supreme Court Justice Lewis F. Powell administered the oath of office to incoming Governor Douglas Wilder. This was appropriate on a number of levels as Powell had been instrumental in historic cases brought before the Supreme Court. Briefly research Powell and discuss the decisions in which he participated. 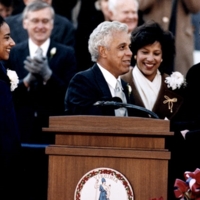 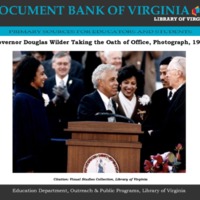