The First Continental Congress met in Philadelphia in the autumn of 1774. Representatives from the twelve colonies gathered in response to acts of Parliament that became known as the Intolerable Acts. The delegates drafted an association to boycott British goods beginning in December 1774. They also provided for a second Continental Congress to meet in May 1775. On September 5 and 6, 1974, in celebration of the bicentennial of the First Continental Congress, Virginia Governor Mills Edwin Godwin Jr. (1914–1999) and the governors of the other states made up the original colonies gathered in Philadelphia for a reenactment of the historical event.

Analyze: Take a look at the Governors from 1974 compared to the those who are serving in present-day. How has the demographic make-up changed, if at all, in 40 years? 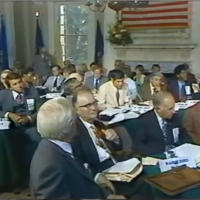