The Bureau of Refugees, Freedmen, and Abandoned Land (Record Group 150), also known as the Freedman’s Bureau, was established by an act of Congress in 1865. The Bureau supervised and managed all matters related to refugees, freedmen, and lands abandoned or seized during the Civil War. Documentation was a primary goal of the Bureau.  Cohabitation bonds and records document the efforts of freedmen to register and legalize their marital status after emancipation at the end of the Civil War. Marriage certificates, marriage licenses, monthly reports of marriages and other proofs of marriages were compiled by the Freedmen’s Bureau between 1861 through 1872. Cohabitation registers were the legal vehicles by which former enslaved people, who were previously prohibited from legally marrying, legitimized both their marriages and their children.

The cohabitation register, or as it is properly titled, Register of Colored Persons…cohabiting together as Husband and Wife on 27th February 1866, was the legal vehicle by which formerly enslaved people legitimized both their marriages and their children. The information about an individual person contained in a cohabitation register is invaluable as it is often the first time that a formerly enslaved person appeared officially in the public record and because of the extensive kinds of information that the register recorded. Though recorded at the local level, registers may not exist for every Virginia county.

The register dates from 1866 and provides a snapshot in time for the individuals recorded therein, offering a wealth of information that may otherwise be impossible, or at least very difficult, to uncover. The extensive information about an individual contained in a cohabitation register is literally priceless, both for its detail and because it is often the first time that a former slave appears officially in the public record. Cohabitation registers are among the most important genealogical resources for African Americans attempting to connect their family lines back through the oftentimes unrecorded past to uncover their enslaved ancestors.


Citation: Culpeper County (Va.) Register of Children of Colored Persons whose Parents had ceased to cohabit which the Father recognizes to be his, 27th February 1866, [register page 1]. Cohabitation Registers Digital Collection. Library of Virginia.

Scan It: Scan the document. What information is provided on the document? Why might such a document have been necessary?

Analyze: What kinds of demographic information can be found in this document? How might it be helpful to someone trying to trace his or her family history?

Another Perspective: The information contained in the registers provides information to families seeking their genealogy and ancestral history. Why might it be difficult for the descendants of enslaved people to find such information in public records? Consider what recordkeeping was like for enslaved people prior to the Civil War and how that may impact a genealogical search. 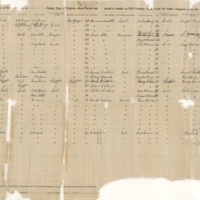 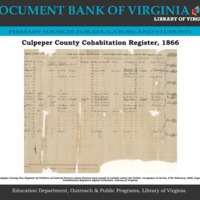