Adolphus, Contract to Be Hired Out, 1865

Enslaved Virginians were often hired out by their owners throughout the course of their lives. The owner of the enslaved person would be paid, and terms would be outlined in the contract for service. Industries, such as the Tredegar Iron Works in Richmond, and other iron and woolen mills throughout the state employed unpaid skilled and unskilled enslaved people to augment their workforce. Farmers and individuals would also hire enslaved people to provide additional assistance at certain times of the year. The typical employment contract would be for one year and stipulated humane treatment and that food and clothing be provided.

We do not know who Susan Monroe and James Colson were, or how they intended to employ Adolphus. The agreement, signed January 2, 1865, became null and void just a few months later when the Confederacy ceased to exist in April of that year. At that time, Adolphus became a free man and was no longer under any obligation to Miss Walthall, his stated owner owner in the contract. It is unknown if Adolphus renegotiated his contract with Monroe and Colson to continue his employment with them or if he decided to find another source of employment as a free man.

Scan It: Scan the document. What do you think is the purpose of this document? Why?

Analyze: Take a close look at this contract. Who is Adolphus? Who is hiring him out? What is he obligated to do?

Think About It: What you think happened to Adolphus after he was freed? Do you think he renegotiated his contract with Monroe and Colson? Do you think he continued to work with them? Why or why not? What else could he have done instead? 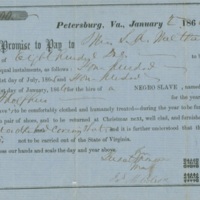 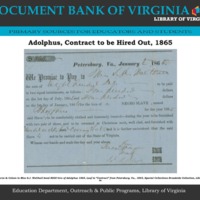