In1860, a census was taken to determine the Enslaved population in the state by county. The information on the census provided insight into how counties voted to name representatives to the Virginia Convention. Enslavement was a major factor in the debate over secession. Voters in the counties where the enslaved population was greatest elected more supporters of secession to the Virginia Convention than did voters in the counties where slaves were a smaller proportion of the whole population. Lewis E. Harvie, who introduced the first secession resolution on April 4, 1861, represented Amelia and Nottoway Counties. Both counties had more than 70 percent of their population who were enslaved.

This map showing the distribution of slaves in Virginia in 1860 was published in Washington, D.C. The percentages of slaves in many of the counties were later determined to be incorrect because the tabulation omitted free blacks from the county totals. Captain W. R. Palmer, of the army's Department of Topographical Engineers, inscribed this copy for Secretary of the Navy Gideon Welles.


Citation: E. Hergesheimer, Map of Virginia Showing the Distribution of its Slave Population from the Census of 1860, C. B. Graham, Lithographer (Washington, D.C.: Henry S. Graham, 1861), Library of Virginia.

Look at It: Look at the map. Based on the information provided, what information does it provide? Why might this information be important for legislative decisions made at the time it was produced?

Be the Journalist: Step into the role of journalist in 1860. Write a brief description of the map and explain its purpose to an audience who may be uninformed but interested in the potential legislative uses of the information provided on the map. 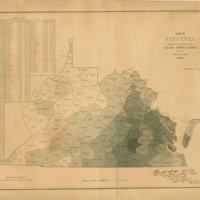 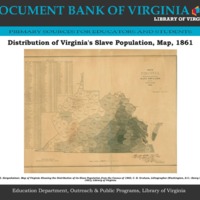