Richmond's former city hall building, known as Old City Hall, is located on Broad Steet with one side facing Capitol Square and another facing the current city hall building. The building stands out as a remnant of the Gothic Revival style popular early in the 20th century. It featured intricately carved granite façades, grand staircases, and large atriums with skylights. Elijah E. Myers won a national competition in 1886 to design Richmond's city hall. He had previously designed the capital buildings of Michigan, Colorado, Idaho, Texas, and Utah. After the building was constructed for an amount exceeding Myers’s original bid, it was found that he had resorted to bribery to ensure that his design had been selected.

Its site was the location of the previous city hall, built in 1818 by Robert Mills, one of the first American-born professional architects. It had been demolished in 1874 after being found structurally unsound following several changes to the building.

Construction began on the new city hall in 1886. The granite was obtained from nearby quarries on the banks of the James River. When the city council attempted to employ contract workers from out of state to save money, the Knights of Labor and other local union members organized a political campaign that resulted in the election of white and Black council members on a "Workingmen's Reform Ticket." The city council agreed that construction would be performed primarily by local workers, including skilled craftsmen such as iron workers and stonemasons. Although Black laborers were employed in city hall's construction, skilled Black craftsmen were excluded.

The costs of building such a large and intricate structure went well above the $300,000 budget. In 1894, eight years after construction began, it was completed with an astounding $1.3 million price tag. The finished building had four uniquely carved towers, including a clock tower. Despite the imposing thick exterior walls, the interior of the building is centered on a large courtyard with a skylight ceiling and a gallery of archways with columns. In 1915, there were calls to demolish the building to create a pedestrian mall on the north side of the Virginia State Capitol, but the plan did not go forward. The building was used as a courthouse and center of local government until the 1970s when the current city hall building was constructed across the street.

In 1969, Old City Hall was listed on National Register of Historic Places and was designated a U.S. National Landmark in 1971 after it was spared from demolition a second time. Today, the building is used as government office space. Despite undergoing renovations it retains many of the original features, making it a remarkably well-preserved example of 19th century Gothic Revival architecture from Richmond’s past.

Look at It: Look at the image. What makes this style building stand out? Why might the architect have chosen to use this style when designing the building?

STEM STAT: You are working with historic preservationists to find way to restore the original features of the building while making it functional as a 21st century office space. What would you suggest based on the design and structure of the building? How would you go about redesigning the structure to accommodate 21st century needs? What resources would be needed to achieve the desired outcome?

Artistic Expression: Create a print advertisement to encourage tourists to take a tour of Old City Hall. Be sure to include information about the unique architecture and location of the building.

Food For Thought: Old City Hall was spared from demolition twice in its history. Why would people work to save such a building? Why would some want to demolish the building? Consider its location in downtown Richmond, changing styles of architecture, and the cost effectiveness in the upkeep of such the building. 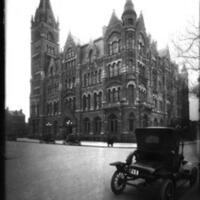 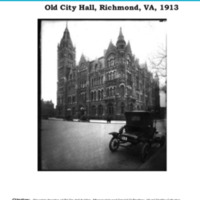