Black men gained the right to vote when the Fifteenth Amendment to the United States Constitution was ratified in 1870. Later in the 19th century, white men in Virginia passed laws requiring literacy tests or payment of poll taxes that made it more difficult for Black men to vote. A new state constitution in 1902 strengthened those restrictions and disfranchised more than 90 percent of Black men. So as not to violate the Fifteenth Amendment that prohibited discriminating against eligible voters "on account of race, color, or previous condition of servitude," the 1902 constitution's provisions made no reference to race and resulted in the disfranchisement of almost 50 percent of white male voters as well.

When women gained the right to vote after the Nineteenth Amendment was ratified in 1920, Black women in Virginia faced the same restrictions and far fewer Black women than white women were able to register to vote. In the 1950s, during the civil rights movement, Black Virginians held numerous voter registration drives around the state and some filed lawsuits against local registrars to challenge the constitutionality of poll taxes. It was not until 1966 that the United States Supreme Court ruled that the use of poll taxes in any election was unconstitutional.

This photograph was taken during the 1950s at a time when voting rights were not guaranteed and African Americans were challenging segregation in schools, transportation, and other areas of public life. The sign on the blackboard was probably posted for a lesson on citizenship and the importance of voting in elections.

Citation: African American teenagers and teacher in a classroom; A sign reading "Citizenship through voting" is on the blackboard, Portsmouth Public Library (Portsmouth, Va.). Esther Murdaugh Wilson Memorial Room.
Image is available in the Library of Virginia's online catalog here.

Form an Opinion: Write a letter to a 1950’s Senator and/or Representative for the state of Virginia from the perspective of one of these students. Explain why the right to vote is important to you and how you are not guaranteed that right (what limitations existed from the 1902 Constitution)?

Current Connections: What connections can you make to current changes to voting laws in some states? How does the past impact the present on this issue? 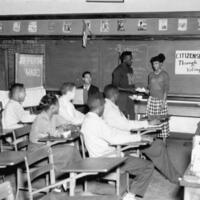 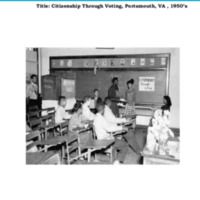