As Americans prepared to send soldiers overseas during the First World War, the government reorganized the economy to better supply and equip its troops. Peacetime industries shifted towards producing needed military goods (like uniforms and ammunition) and commercial farming focused on feeding servicemen at home and abroad.

Citizens on the home front were asked to contribute to this reorganization in a variety of ways. From buying war bonds to reducing wasteful food practices, many citizens enthusiastically participated in patriotic initiatives intended to streamline and support the war effort. As seen in this poster by the National War Garden Commission, the planting of war gardens, also known as Victory Gardens, was one way civilians could help. American children's book illustrator Maginel Wright Enright designed this poster in 1919 to symbolize the victory of the Allied forces over Germany and the Central Powers.

War gardens were small gardens planted by individuals who grew fruits, herbs, and vegetables during both World War I and World War II to support the wartime economy. They were

planted in backyards, parks, and other available spaces. The planting of war gardens was encouraged to increase household self-sufficiency lessen the demands on commercial farmers. War gardens were so effective during World War I that the government endorsed their use during World War II. As a popular activity that engaged men, women, and children while also supporting the economy, war gardens were just one example of how the home front played a crucial role in the American war effort.


Look at It: Look at the image. What do you see? What emotions are being evoked in this poster? What activities is it trying to encourage?

Making a Connection: Imagine you and your classmates are living during the First World War and want to plant a War Garden at your school. Where would you plant it? What would you plant?

Analyze: Compare and contrast the program for War Gardens with other home front initiatives (like buying wartime bonds, reducing consumption, etc.) during World War I. Which do you think was the most effective? Why?

Artistic Exploration: Create your own poster to encourage others to plant a War Garden. How might you visually convince others to participate? 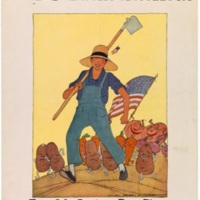 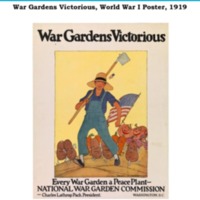