The New York State Association Opposed to Woman Suffrage (NYSAOWS) was one of the most active women's anti-suffrage groups in the state of New York. The group was formed in April 1895 and consisted of prominent women who fought against the cause of women's suffrage by giving speeches, handing out materials and pamphlets and also publishing a journal. There were several auxiliaries of the group throughout New York and it was considered one of the most active anti-suffrage groups in the state. NYSAOWS would receive requests for information, advice or assistance from women in other states, including Virginia.

NYSAOWS members believed that women participating in politics would be "disruptive of everything pertaining to home life." They also felt that women's roles as mothers and caregivers meant they did not have to do "further service" as citizens. Overall, the members believed that a majority of people were on their side and all they had to do was help "women to recognize the vital need for 'a division of the world's work between men and women.'" In 1896, NYSAOWS believed that only 10% of women actually wanted the vote. NYSAOWS also used tactics such as associating women's suffrage with "support for socialist causes."

Analyze: Why is the “Economical Woman” against suffrage? What are the main arguments?

Social Media Spin: Using hashtags and memes, convert the messages of this broadside into short, social media-style messages that may have been used had the technology existed at the time.

Analyze: Compare this broadside to two other items in Document Bank or other primary source material that sought to limit the rights of a particular group. How are the messages similar? What themes or styles are consistent across the topics and time periods?

Artistic Exploration: Create a placard that an anti-suffragist may have carried, sharing the views from the "Economical Woman." 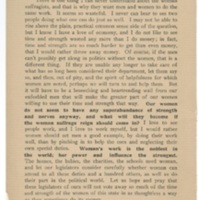 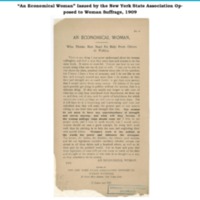