At the turn of the twentieth century, the call for the  prohibition of alcohol had become a national issue, advocated by many politicians and pushed by several strong organizations. The American Temperance Society, started in 1826, acted as a support group for members who took a pledge to abstain from alcohol. The Prohibition Party, founded in 1869, is the oldest existing third party in the United States, garnering 5,617 votes in the 2016 presidential election. The Woman’s Christian Temperance Union, started in 1874, tended to focus on the moral implications of drinking and its effect on the family. Formed in Ohio in 1893, the Anti-Saloon League (ASL) used statistics, not morals, to fight the war on alcohol and Virginians organized a state league in 1901.

The Eighteenth Amendment, which prohibited the manufacture and sale of alcohol in the United States was ratified in January 1919. Thirty-two states, including Virginia, had already voted to go dry. The amendment was set to go into effect on January 17, 1920. Flush with its victory, the Anti-Saloon League tried to assuage any lingering doubts with the publication of “The Verdict” in April 1919. To provide the “most reliable and representative sources,” a committee of league members asked the governors of the dry states about the success or failure of prohibition. Some of the reports provided statistics of the effects of prohibition, while others offered merely platitudes, but the governors overwhelmingly endorsed the success of prohibition in their states. The Anti-Saloon League clearly had high hopes for national Prohibition. Driven by this single mission, the Anti-Saloon League members were willing to ally with any group, including Democrats, Republicans, the Ku Klux Klan, the NAACP, the International Workers of the World, as well as many leading industrialists, including Henry Ford, John Rockefeller, and Andrew Carnegie.

The consistent pressure of the Anti-Saloon League forced public figures and organizations to take a stand: wet or dry?

Analyze: According to the information in the document, was prohibition working in these states? Why or why not? Explain your answer, citing at least three specific examples.

STEM STAT: Use the information from New Hampshire (No. 15) and Texas (No. 24) to determine the percentage decline in arrests for drunkenness. How could this result be used to argue for or against prohibition? 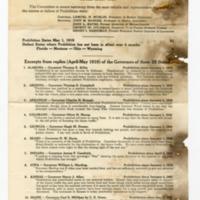 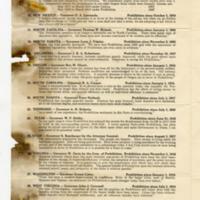 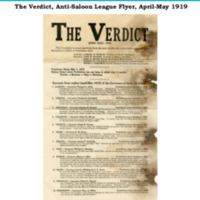