The Progressive Movement in the United States lasted from the late 19th Century until the mid-1940s. While many positive social reforms occurred, there were also laws enacted in which people who were thought to be “inferior” in some way were subjected to medical tests and treatments. If an individual was found to be unfit they were often institutionalized or forcibly sterilized. Those who wanted to prevent those considered unfit to procreate believed that certain traits, like insanity, criminal tendencies, shiftlessness, promiscuity, and “feeble-mindedness” were hereditary, and that these traits were not to be passed on to future generations. Virginia and other states started to add criteria, in the legal language of the day, to marriage applications, requiring that applicants swear that they were not “a habitual criminal, idiot, imbecile, hereditary epileptic, or insane.” Virginia started its sterilization program in 1916, and it was codified into law with the Virginia Sterilization Act of 1924. Other states started passing sterilization laws that allowed institutions to remove the reproductive capacities of its inmates. By 1940, twenty-eight states had authorized compulsory sterilization. The path to these laws was paved in 1927 when the United States Supreme Court decided the case of Buck v. Bell and upheld a state’s right to sterilize a person deemed unfit to have children. The case was centered on a young woman named Carrie Buck, who the state of Virginia determined to be “Feebleminded,” a term used in the period to describe people who were thought to be of less than average intelligence.

Carrie Buck was born in 1906 in Charlottesville and was raised by foster parents. Carrie’s biological mother, Emma Buck, had been determined by the state to be of low intelligence and was committed to the Virginia State Colony for Epileptics and Feeble-Minded. In 1924, Carrie had a baby out of wedlock and stated that she had been raped by her foster parents’ nephew. However, her foster parents claimed that she had invited the contact due to her promiscuity, and her behavior offered further proof to have her committed to the Colony like her mother.

The superintendent of the Virginia State Colony for Epileptics and Feeble-Minded, Dr. Albert Priddy, believed that there were people who should not have children as the undesirable traits could be passed to a child. He selected Carrie Buck as a test case to make sure the Virginia law was constitutional. The document is an excerpt of Dr. Priddy’s testimony from a brief prepared for the Supreme Court of Appeals of Virginia in 1925. The case was appealed all the way to the Supreme Court, where the sterilization law was confirmed as constitutional: Chief Justice Oliver Wendell Holmes declared that “three generations of imbeciles are enough.” Buck was sterilized in 1927. During the Nuremberg trials after WWII, several Nazis on trial based their defense on the prevalence of sterilization in the United States and the Supreme Court decision in Bell v. Buck. Over 60,000 Americans, including 8,300 Virginians, were sterilized by the time these laws were repealed in the 1970s. In 2002 the governor issued a formal apology to those Virginians who had been involuntarily sterilized.

Scan It: Scan the document. What do you notice about the purpose of document from the cover page? Do any words or phrases stand out to you? Why did they stand out?
Post Activities

Food For Thought: Think about how far society has progressed in the treatment of those who may need special services for a variety of health or mental health reasons. Is there anything that may be done better to assist people in need? Explain. Be the Journalist: You are a 21st Century journalist writing a story about the Buck v. Bell case and how it impacts society today. Who would you interview? What are three questions you might ask to get the information you seek? 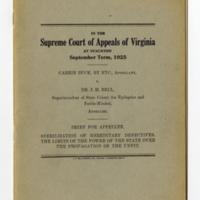 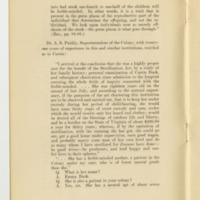 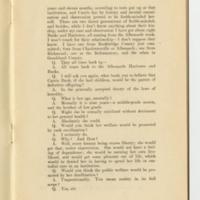 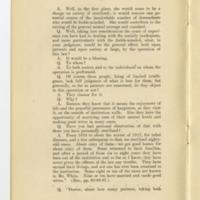 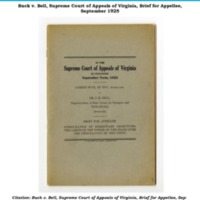 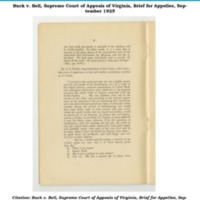 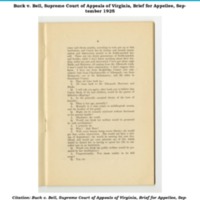 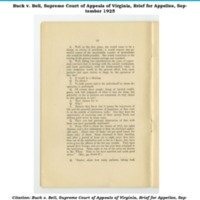