The second quarter of the nineteenth century was dominated by reform movements:  the Second Great Awakening, abolition, women’s suffrage, utopian societies, free public schools, and reforms of prisons, hospitals, and mental institutions. All strived to fix the social problems that dogged the new nation. Many of these reformers identified alcoholism as the major domestic problem of the United States. In the 1830’s, alcohol consumption in the United States was the highest it has ever been: an annual average of seven gallons per person, as compared to two gallons now. A huge influx of German and Irish immigrants brought over their “corner pub” culture, thus making the threat of alcohol on society literally more visible. Led mostly by women, the temperance movement blamed alcohol for most of the family problems: poverty, domestic violence, child abuse, unemployment, and disease.

The Bottle is a series of eight illustrated panels that show the damages ravaged on a family by alcohol.  Originally published in England in 1847 by George Cruikshank, The Bottle became wildly popular, selling more than 100,000 copies in its first few days and inspiring plays in eight London theaters at the same time. The Bottle was exported to the United States, where, lacking a copyright, it was reproduced by a number of publishers. The first plate shows a prosperous and happy family where “The Bottle is brought out for the first time: the husband induces his wife ‘Just to take a drop." The following plates show the deleterious effects of alcohol: the father loses his job, they sell their belongings, the baby dies, the children beg in the street.  Plate 6 shows the same family in the same room, but the drunken father is attacking his wife, while his children try to restrain him and a concerned neighbor bursts in. The last two panels show that the husband has killed his wife, gone insane, and landed in jail, with his children left on their own “to Vice and to the Streets.” on the streets. The success of The Bottle led Cruikshank to publish a sequel The Drunkard’s Children, which follows the boy and girl through a life of dancing, gambling, dissipation, crime, imprisonment, and suicide. Inspired by these etchings and encouraged by the rise of anti-alcohol tracts and lectures, Americans jumped on the temperance bandwagon. The Civil War swept these concerns to the side, and by the 1880’s the temperance movement consumed the nation, leading many counties and states to vote to ban alcohol.

RELATED DOCUMENTS: To see all eight panels, visit the Library of Virginia blog at http://www.virginiamemory.com/blogs/out_of_the_box/2017/05/18/the-temperance-movement-and-the-road-to-prohibition/

The Bottle, Plate V. “Cold, Misery, and Want, Destroy Their Youngest Child: They Console Themselves with the Bottle,” 1847. Lithograph by D. W. Moody after etchings by George Cruikshank. Library of Virginia, Richmond, Virginia.

Current Connections: How would you change or update these drawings to show the dangers of opiates?

In Their Shoes: If you were a member of this family, what would or could you have done to stop this chain of events? 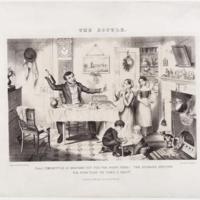 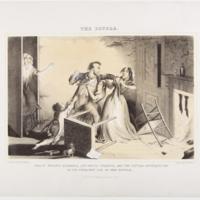 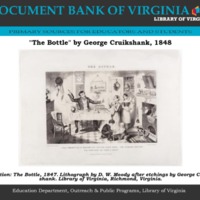 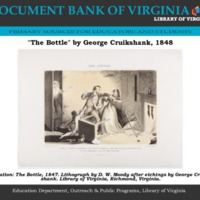